Being one of the oldest sports in history, and included in the first Summer Olympics Games in 1896, fencing is renowned worldwide. However in western society, its popularity may not be so familiar.

But whether you’re in the USA, Italy, or Antarctica, fencing is well known and heard of. However, you may still wonder;

Where is fencing most popular? Fencing is most popular in Europe, mainly in Russia, France, Italy, Hungary, and Germany.

But by looking at the number of fencers in a country’s federation compared to its population, (fencers per capita) Italy, France, Hungary, Germany, and Switzerland are countries where fencing is most popular.

However larger countries like China, the U.S, and Canada likely have more fencers than these countries, the fencing population is small compared to the entire country’s.

Where Are The Best Fencers From?

You might be able to measure the popularity of fencing in a country, by measuring the skill level. A country would usually have good fencers if there’s a lot of competition and a lot of facilities.

There are fantastic fencers from all around the world. However, if we combine men’s and women’s foil, epee, and sabre fencing in the Olympics, we can see which countries the best players really come from. 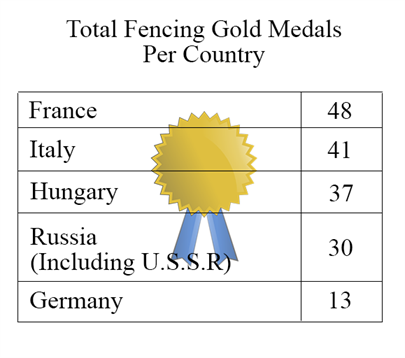 It’s no surprise that you can find the best fencers in France, where swordsmanship has been respected for centuries.

Most fencing terms are even French words! And to add to that, the swords we use are derived from the French smallsword. Fencing has been popular in these countries since its birth in the 1300s.

Italy, being a close second to France, is considered one of the inventors of fencing, as well as the home to Domenico Angelo, who was key in progressing fencing into what it is today.

In countries where fencing isn’t popular, it is almost unheard of. Compared to sports like soccer or basketball, fencing is considered one of the less popular sports. If you ask a non-fencer if they could name any famous fencers, and they can’t, then you may be in one of those countries.

In many European countries, many fencers have become household names. Everyone in these countries knows of Yannick Borel and Pauline Ranvier. Fencing matches are played on national T.V, bookstores have all kinds of books on fencing, and there’s at least one fencer on every corner. Sounds like a dreamland!

Where Was Fencing Invented?

There’s no simple answer as to where fencing was invented. Dueling with swords has been around since ancient Egypt and has progressed in many places throughout the centuries.

Schools for fencing have been around since the medieval ages. The earliest can be traced back to Italy, and Germany. Many fencing manuals, schools, and leagues also come from these countries.

Because of the history the Germans and Italians have in teaching fencing, many people consider them to be the two places of origin. Although the first manual did come from Germany.

However, today’s fencing as we know it can be credited to Italy. More specifically, a fencing master named Domenico Angelo, who created Angelo’s School of Arms, where new rules and equipment were implemented into the game.

Following that, the French took these new rules, and advanced them, as well as adding new phrases. This is why in fencing we still use French. More on fencing’s history at https://fencingprodigy.com/who-invented-fencing/

Fencing has sustained its popularity throughout the centuries, but in some areas it may be hindered. Outsiders may think it’s a dead sport, or outdated. But the community is expanding and the love of the sport is still there, and as long as we keep fencing, the sport will never die.

Fencers, aspiring swordsmen, and anyone interested in the sport, welcome. I’m Tristan, the 19 year old face behind Fencing Prodigy. After a few years of learning the skill of the blade, I fell in love with the fencing. I created Fencing Prodigy in hopes to spread the joy of fencing and help expand the community!

As an Amazon Associate, I earn from qualifying purchases. Amazon and the Amazon logo are trademarks of Amazon.com, Inc. or its partners. This site also participates in other affiliate programs and is compensated for referring traffic and business to these companies

This website uses cookies to improve your experience while you navigate through the website. Out of these cookies, the cookies that are categorized as necessary are stored on your browser as they are essential for the working of basic functionalities of the website. We also use third-party cookies that help us analyze and understand how you use this website. These cookies will be stored in your browser only with your consent. You also have the option to opt-out of these cookies. But opting out of some of these cookies may have an effect on your browsing experience.
Necessary Always Enabled
Necessary cookies are absolutely essential for the website to function properly. This category only includes cookies that ensures basic functionalities and security features of the website. These cookies do not store any personal information.
Non-necessary
Any cookies that may not be particularly necessary for the website to function and is used specifically to collect user personal data via analytics, ads, other embedded contents are termed as non-necessary cookies. It is mandatory to procure user consent prior to running these cookies on your website.
SAVE & ACCEPT